At the Regional House, we welcome various groups: some for pastoral formation, others as Associates for their meetings, there are also vocational gatherings for youth. Our Sisters undertake parish pastoral work in base communities, in liturgy, in catechesis, in spiritual companioning.

We also minister in several other regions in Brazil where we receive drug-dependent women for a recovery period within the ECOVIDA therapeutic community under the direction of the Congregation's Élisabeth Bruyère Association. In other areas, we work in pastoral evangelization with children, youth and adults and we collaborate in missionary animation in the pastoral region's level. In addition, we are involved in pastoral social action with families seeking to live with dignity. We help those in need, organize social and educational projects for youth and welcome women, victims of domestic violence, through social services led by our Sisters. We collaborate in a social project destined for families in need so as to bring about better intellectual, social and emotional development for their children and adolescents. 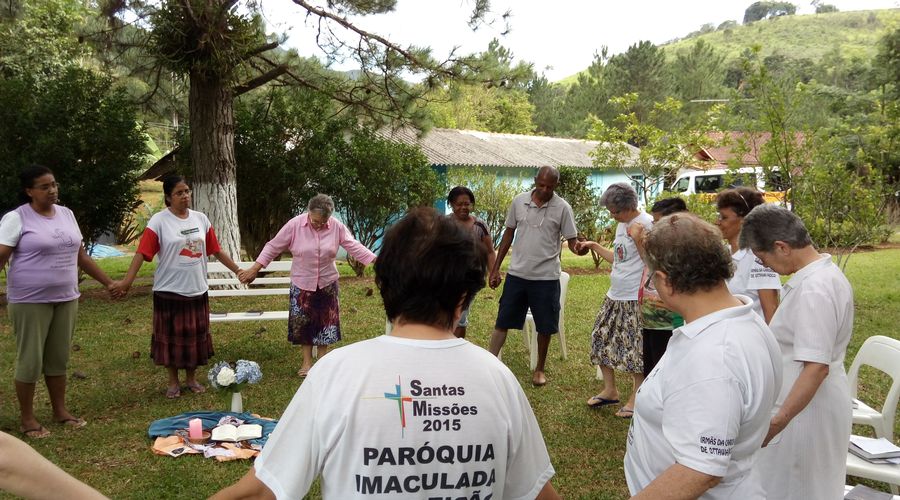 Sisters and Associates in prayer. 2/4

Sister Maria Araujo do Socorro and teenagers in formation. 3/4

In Brazil, everyone gets involved. Sisters Marli, Lourdes, Claricia and Geni prepare the meal. 4/4

Sisters and Associates in prayer. 2/4

Sister Maria Araujo do Socorro and teenagers in formation. 3/4

In Brazil, everyone gets involved. Sisters Marli, Lourdes, Claricia and Geni prepare the meal. 4/4

In 1961, the first four Canadian missionaries were sent to Brazil on the invitation of Bishop Marie-Joseph Lemieux, OP. He hoped for some form of collaboration between the Sisters and priests from the dioceses of Ottawa, Hull and Mont-Laurier working at that time in the diocese of Marília, in São Paulo. After an intensive Portuguese language course in Marília, they settled in the city of Tupi Paulista, in the State of São Paulo. They began working at the Santa Casa Hospital in Tupi Paulista and became involved in the parish. Later, they took care of the elderly at Asilo São Vincente de Paulo which was located in the same city.

In 1962, with additional Canadian missionaries being added to their number and new Brazilian Sisters joining the community, they proceeded with the building of Sainte-Marie Convent in Tupi Paulista, as well as opening other houses in the following regions: Panorama, Pau Dalho, Monte Castelo and Junqueirópolis.

In 1965, a new mission was begun in the Vila Fatima sector of the city of Guarulhos, on the outskirts of São Paulo. One year later, this mission was transferred to the Bom Clima sector, in Cocaia. Here the Sisters were mostly involved in the diocese.

The year 1982 saw the first steps of the mission in Ferraz de Vasconcelos, in the State of São Paulo, where the Sisters were involved in parish pastoral and social work until 2011.

To this day, the Sisters respond to several calls from different areas. Once their mission is complete, they leave one area to go where the needs are more pressing. They have gone to help in the State of Minas Gerais at Ouro Preto, at Monte Azul, at Belo Horizonte, at Ninhera, at Taiobeiras and at Lafaiete, in the State of Bahia, at Barreiras, in the State of São Paulo, at Santa Bárbara d’Oeste, at Sapopemba, at Parada Inglesa and in the Macedo sector, in Guarulhos where, since 2011, we find the new Regional House and the Centro de Espiritulidade Élisabeth Bruyère.

Be compassionate with the very difficult patients as you would with the easier ones.
Élisabeth Bruyère
For everyone born of God overcomes the world. This is the victory that has overcome the world, even our faith.
1 Jn. 5;4
Love It, is to increase by forgetting. (...) It is giving appointment to happiness in the palace of chance.
Abel Bonnard