Lesotho and the Republic of South Africa — St. Theresa of the Child Jesus Province

In order to better respond to the basic needs of their people, our Basotho Sisters began by multiplying the traditional works of the Congregation. They are totally committed to education, health care and social services.

In education, their institutions range from preschool to collegiate level. They are responsible for a preschool program in the capital, Maseru, and for four kindergartens in rural areas, for a primary school with boarding in Pontmain and for three secondary schools with boarding. In order to maintain these institutions, the Sisters receive their qualifications from the Universities and Colleges according to their specialty.

Health Care is offered in two hospitals, in Paray and Seboche, where one can find several doctors and other health care professionals. A range of services and specialized clinics are available to patients ranging from prevention to direct care to outpatient and mobile clinics, to triage and treatment, including counseling for persons affected with HIV-AIDS. In addition, six clinics or small health centers in rural areas complete this network. In Paray, the hospital also houses a nursing school who trains not only practical nurses, but also registered nurses.

In social service, an orphanage has been opened in Maseru called "Bytown Center" to care for children orphaned by the AIDS pandemic. The Sisters also have a home in Pontmain for some fifteen elderly women whose families have abandoned them.

Most of the Sisters minister within our various institutions; still others teach in the parish schools or are employed in parish pastoral work or in various areas which benefit from the presence of the Sisters.

This mission can look forward to the service of our Sisters for several more years since the generous commitment of young women in these countries guarantees a succession that is dedicated and competent. 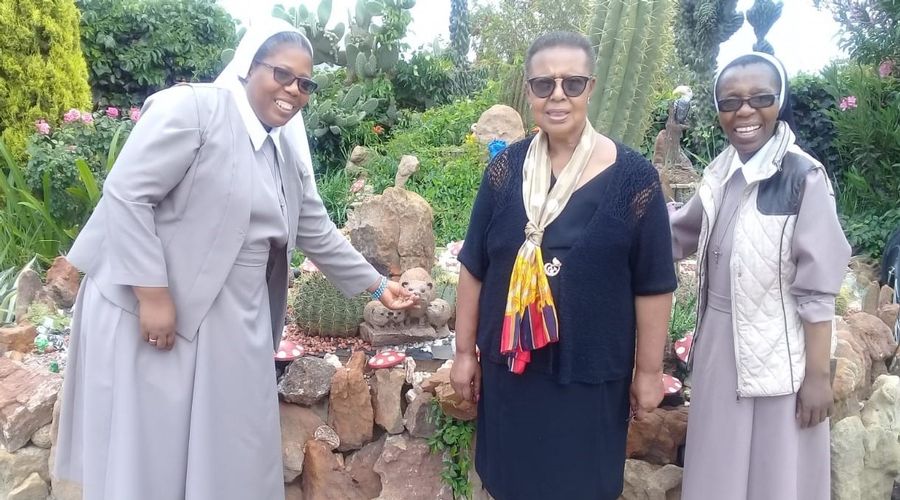 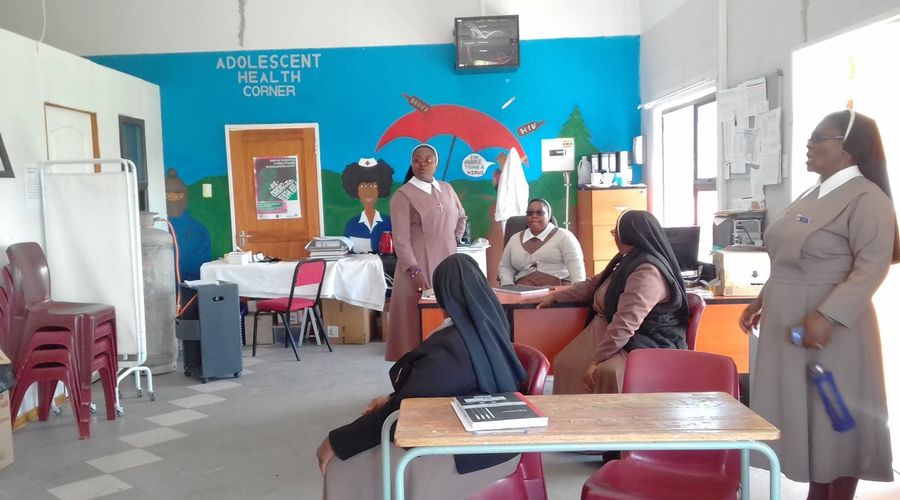 A visit to a Teenager Health Centre in Thaba-Tseka Hospital, Paray, where our Sisters work. 2/4 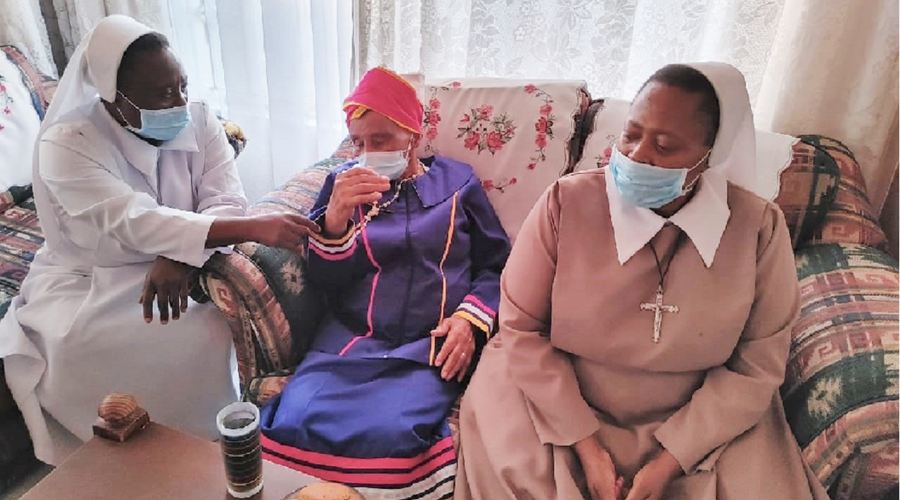 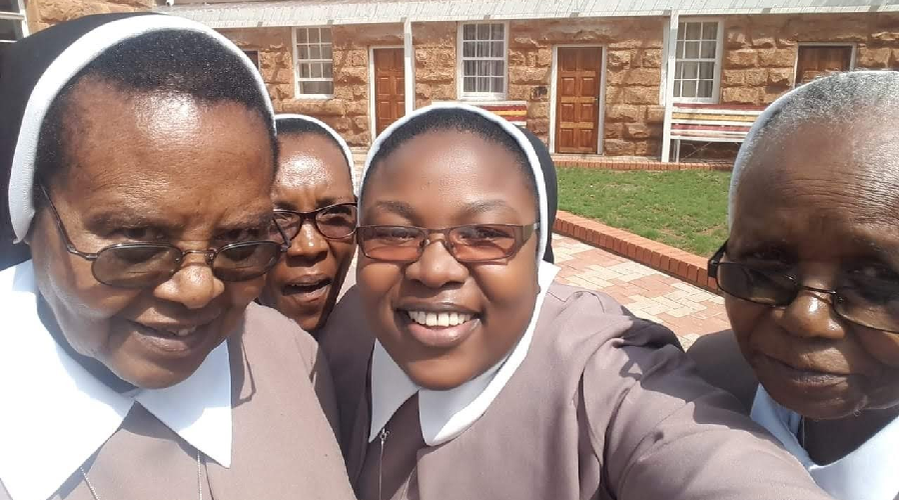 A visit to a Teenager Health Centre in Thaba-Tseka Hospital, Paray, where our Sisters work. 2/4

The History of the Province in Lesotho

Having heard the urgent invitation from Pope Pius XI in favor of the missions, Father Philemon Bourassa, Provincial of the Missionary Oblates of Mary Immaculate, officially approached Mother Saint Bruno, Superior General. He requested the services of teaching Sisters to form future leaders and, at the same time, to offer health care in a hospital or dispensary.

In 1931, the Congregation responded positively to this invitation to bring Mother Bruyère’s charity to Africa. Five Sisters journeyed from Canada to Durban by ship and arrived in Pontmain, Basutoland, now Lesotho.

In 1934, a novitiate was inaugurated in Pontmain. Two years later, six novices became temporarily professed. In spite of numerous challenges, especially those from the local language, primary and secondary schools, boarding schools, agricultural and industrial classes, gardening, sewing, as well as clinics and hospitals were gradually established to respond to the needs of the people.

In 1958, the D’Youville Junior Secondary School received a 75% success rate following the exams from the Department of Education.

In 1960, Our Lady of Providence Hospital in St. Charles Parish of Seboche saw the light of day. Three years later, the dispensary had evolved to become a fully functional hospital. The Sisters' residence was then part of the hospital complex. In 2019, the Sisters moved into a new convent in proximity to the hospital.

Beginning in 1966, what had been known as Basutoland would henceforth be called Lesotho. It is a small independent state in the territory of the Republic of South Africa.

St. Denis mission in Leribe began on February 20, 1967 where the Sisters would be involved in education. They left this location in 1989.

In 1969, a secondary school opened in Pitseng (Pontmain). The Sisters offer a high quality of education in this institution.

There was a great drought in 1970. Persons and animals would collapse along the roadside. In Pontmain, just barely 12 inches of water in the reserve tank raised the level of anxiety. Within the mission compound, there were about 800 persons: priests, Sisters, boarders, students, without adding the hundreds of villagers who came regularly for water. Water was rationed, but they were never without. Throughout the drought, the water level in the tank never went below the 12 inch level.

In 1976, the new convent, Marguerite d’Youville, received a blessing as it opened in Maseru, the capital of Lesotho. The primary service offered here was preschool.

In 1977, a nursing school was founded in the Paray Hospital, itself in operation since 1939, thanks to assistance from the Private Health Care Association of Lesotho (CHAL). The Congregation sponsors this school. Both institutions have enjoyed an excellent renown throughout the country.

In April 1992, Louis Gerard Convent in Likhakeng Ha Mahlomola welcomed some Sisters who inaugurated a small health center. Later, this convent would also become the pre-novitiate. In November of this same year, the new Provincial House, in Leribe, inaugurated under the name of Divine Providence, would receive the members of the Provincial Administration as well as Sisters working in various apostolates in the area.

St. Claire Convent in Sekamaneng, Maseru, opened in 2000. The Sisters work in the orphanage adjacent to the convent.

In 2009, a home for the elderly and sick Sisters opened in Leribe under the name Paballong Ea Molimo (Under God’s Providence).

History of the Foundation in the Republic of South Africa

Four Sisters from Lesotho traveled to the Republic of South Africa to begin their first mission in Natal Province, in 1952. Although they were few in number, they were involved in education, in health care and in parish work.

In 1961, Marguerite d’Youville Convent opened in Kaalfonteine. The Sisters were involved in social work and in the catechesis of children. This district was not Catholic. The Sisters left in 1966.

In 1962, the Sisters settled in Transvaal and opened Mother Bruyère mission in Atteridgeville. For several years they pursued educational works, catechesis and help to the needy.

In 1979, a country-wide movement coming out of Apartheid swept the country and the Congregation closed the convent in DeWildt to open Our Lady of Lourdes Convent in Denilton, Transvaal.

In 1991, St. Cecile Convent in the Catholic mission of St. Elisabeth of Mamaneng, Marblehall, opened its doors. The Sisters were involved in nursing at an outpatient clinic, in a kindergarten and as parish pastoral agents. This house closed in 2009.

In 2000, St. Theresa Clinic and Most Holy Trinity Convent opened in St. Theresa Mission in Zastron, diocese of Aliwal North. The Sisters remained there until 2011.

Today, two Sisters live in the diocese of Pretoria and work in parish pastoral care.